The surgery is aiming to reduce the number of DNA appointments and we have an active policy on managing this.

When we mean DNA we mean – Failure to attend an appointment is commonly referred to as “Did Not Attend” “Was not brought” or DNA. For the purpose of this policy, the acronym DNA will be used.

As well as being costly in financial terms, patients who fail to attend their agreed medical appointments often create excessive waiting times for other patients.

In 2016, Dr Robert Varham, the then Head of General Practice Development at NHS England, published his “Releasing Time for Care: 10 High Impact Actions for General Practice”[1] of which “Reducing DNA” featured as being one of the areas that was needed to improve productivity. 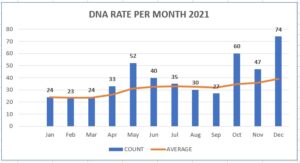 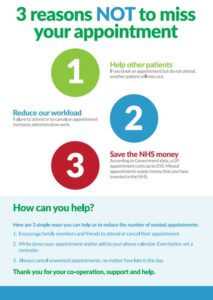